The state of Ohio is in the east-central region of the north of the United States, famous because here are all the beginnings in the development of aviation, and the birthplace of astronauts Jean-Clément and Neil Armstrong. The state is recognized for its prestigious state university and for promoting college sports. Ohio is also a major agricultural producer, excelling in large corn fields, as well as being home to one of the largest Amish communities in the world. Ohio also has its own set of local slangs that either originate from the state or are most commonly used there. If you’re preparing for a trip to Ohio and would like to learn some of these slang expressions then buckle up because we have quite a few for you. Hopefully they’ll make you feel more like a local during your trip! Here are the coolest Ohio slangs you need to know! This refers to the three biggest and most important cities in Ohio, namely Columbus, Cleveland and Cincinnati. When people talk about them on the news for example, they’re often grouped together and abbreviated as the three C’s. Goetta is a Ohio slang that originates from Cincinnati and refers to a sausage patty, a traditional German delicacy. It’s a patty consisting of ground beef, ground pork, oats, onions, celery, and spices which is very popular in the city and is often served for breakfast. While in Ohio you must absolutely try it. Less of a slang and more of a “quick” way to pronounce “What have you been up to?” People from Ohio speak fast and sometimes words get jumbled together to form a single word meaning the same thing. 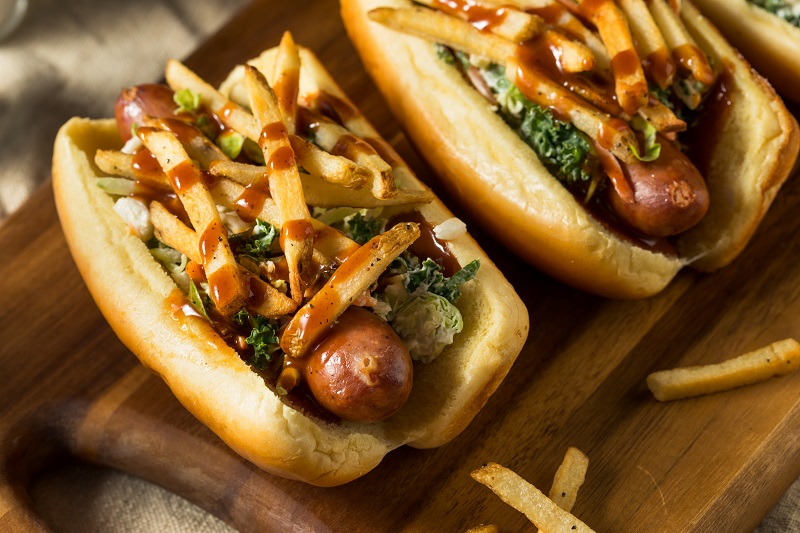 It’s about sausages once again but this time the slang expression refers to a sausage sandwich, because it uses a well known Polish sausage called kielbasa. In addition to the sausage the sandwich includes french fries,  a layer of coloslaw, and barbeque and hot sauce. It originates from Cleveland.

This is slang for a specific location in Cleveland, Ohio. It’s the famous baseball park of the city, home of the team Cleveland Indians. The reason behind the slang is because in the part the park used to be called Jacobs Field. Nowadays it’s a progressive field baseball park.

Buckeye candy is another term for the delicious fudge candies. They are very popular in Ohio and they are candy that closely resembles a tree nut. They’re made of peanut butter fudge dipped in chocolate. You must absolutely try it while in Ohio.

While the intuitive explanation for this slang expression would be something along the lines of “put a decoration” or a pictures on the wall, in Ohio it means to put something away, especiailly after you’re finished using it.

Keep Your Car Safe And Unscratched With These Car Shipping Tips

Cars are very important when it comes to road transportation but the problem is they... Let’s head straight to Honduras. This time we will introduce to you the Villa on... The Most Expensive Rolex Watches in the World

It is no secret to anyone that Rolex is probably the most prestigious luxury watch...