White tattoos had their time of initial success in 2016 when many of the famous people (both men and women) referring to the world of tattoos began to tattoo their bodies with white ink. The white tattoos later had a period of decadence, since they are not as visible in common situations as a black tattoo, but in 2019 they re-emerged strongly and are currently a trend in the world. Today we’re taking a look at the top white ink tattoos for men!

We have seen white tattoos in all parts of the body, although the arms and the back are the two most used places to place these designs. The most prominent feature of white ink tattoos is that they are much more visible with ultraviolet light. 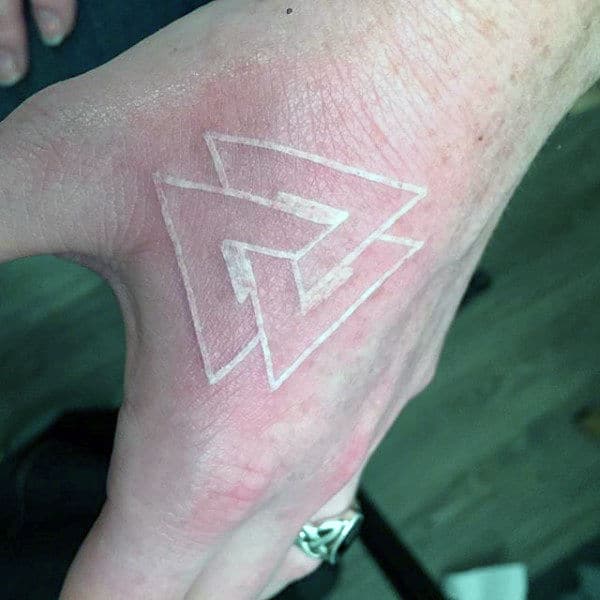 White tattoo of stars seen with ultraviolet light This type of light is what we find in pubs and clubs, so these sites will be where your tattoo. And white tattoos with this type of light stand out much more than any black tattoo in any type of lighting. Precisely the arms and back are the parts of the body that are visible in these environments, so those who choose a white tattoo for their skin want it to be seen and show off their design are usually regulars at night parties. Below you can see an example of a white tattoo on the wrist that looks very good and shines a lot in the sunlight. Tattoo with white ink on light skin. A white tattoo on the upper part of the back will look great in summer and also when we are partying in dark places with ultraviolet light. Hence, this type of tattoos are the most frequent. But the back is not the only area chosen for a tattoo with white ink. This type of tattoos are also very frequent on the wrists since it is a discreet area and in which tattoos that show elegance and distinction abound. We will also find tattoos with white ink on the shoulder (both in the back and in the front) and, to a lesser extent, at the ankle. White ink tattoos for men are much less common. That does not mean that they do not fit well or do not look on a man’s body, but that boys prefer black for their tattoos since, according to their perception, they attract more attention and are more beautiful for them. Men who are more assiduous to tattoos look for more meaning in each design than the elegance or distinction that a white tattoo can bring, so it is less frequent to see these types of designs. Even so, we find some brave ones who bet on this type of tattoos on arms and legs, anchors being one of the most used motifs at the design level. Simply black has been the traditional color of tattoos for a long time and, as we said at the beginning, tattoos in white ink became fashionable for the first time 5 years ago, being something temporary. Until last year the fury or the taste of wearing a white tattoo has not returned again, and it is no longer a matter of fashion, but something that has come to stay on the bodies of many people, especially women who bet on this type of tattoos as something different, striking and elegant. It is also common to see combinations of black and white tattoos, which attract a lot of attention. Again, women are the ones who bet the most on this combination of designs and colors. 1. On which skin do white tattoos stand out the most?

As you all can imagine, dark skin tones are those on which tattoos made with white ink stand out the most. White tattoo on brown skin But that does not mean that if you are a person with light skin, the tattoo will look bad.

2. Black vs white tattoos, which one is better for me?

If we compare the tattoos in black with the tattoos in white, the former clearly win in terms of number. But that does not mean that they are more beautiful, elegant or that they like more.

How to Maximize Security When Sharing Files Online Why You Should Charter an Explorer Yacht in 2021