The Zelda triangle or triforce is a sacred symbol of good luck that appears in the Legend of Zelda series of games marketed by Nintendo. In another article on Lazy Penguins we talked about coin tattoos, today we tell you more about tattoos of the triforce or the triangle of Zelda. The Zelda triangle is very popular in tattoo designs, not only is it a beautiful symbol, it also has a mythology component associated with it. In the Legend of Zelda game, the triforce has the power to grant the wish of the one who touches it. 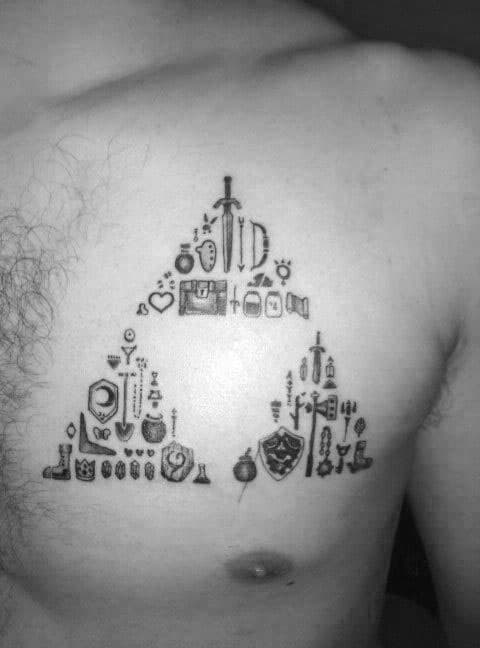 This symbol in turn in the game can reflect the heart of the person who touches it. According to the Sheikah legends, it does not discriminate between good and bad, but if a person does not have a balance between the three forces (that is, they do not have a balance in wisdom, energy and courage), then the triforce would break into three separate parts. The part of the triforce that best embodies the person’s desire will be the only piece to remain in the hand. The other two parts would disappear seeking refuge in other people. To obtain the power of the triforce, the one who has touched it must search for the two missing parts. These two parts will be on the back of the hand of two special people that destiny will choose. How curious in the game when some pieces of the Triforce are close to each other, they will start to resonate and shine. Zelda’s triangle design is inspired by the Sierpinski Triangle, a famous fractal that can be shaped within itself. In the photographs you can see how it is a symbol highly sought after by women, especially for the neck or back area. This tattoo can adapt well to different sizes, so you can see it small in the ankle or wrist area. 1. What’s the meaning of triforce tattoos?

So one of the first meanings of getting this symbol tattooed is to be a “special” person who likes fantasy and has their own world. Another of the meanings is the balance of the three virtues that each triangle represents.

2. What are the most popular part of the body to get triforce tattoos?

The hand is a very popular places to get triforce tattoos.

5 New Hobbies You Can Learn Online

Hobbies are important for many reasons, including the fact that they can help you to...

Things To Keep In Mind When Buying Costumes For Your Cat

The Halloween season is just around the corner, and that means one thing for your...

Brunei is one of the smallest countries of Southeast Asia with less than 410.000 population....